Menu
Log in
Register
Install the app
You are using an out of date browser. It may not display this or other websites correctly.
You should upgrade or use an alternative browser.

well seeing as my old thread got eaten up by the new web page, and how winters about to start i figured i would dust off the old telemark sking thread.haha

So lets hear your name, where you ride and on what.

My names Dan I ski at saddleback mostly, i ski on salomon 1080 skis with scarpa T2 boots. here some pix to inspire you guys and gals. 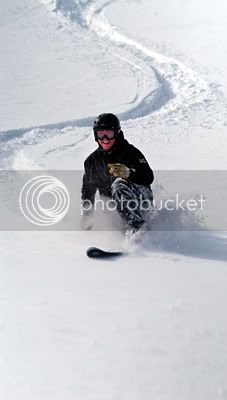 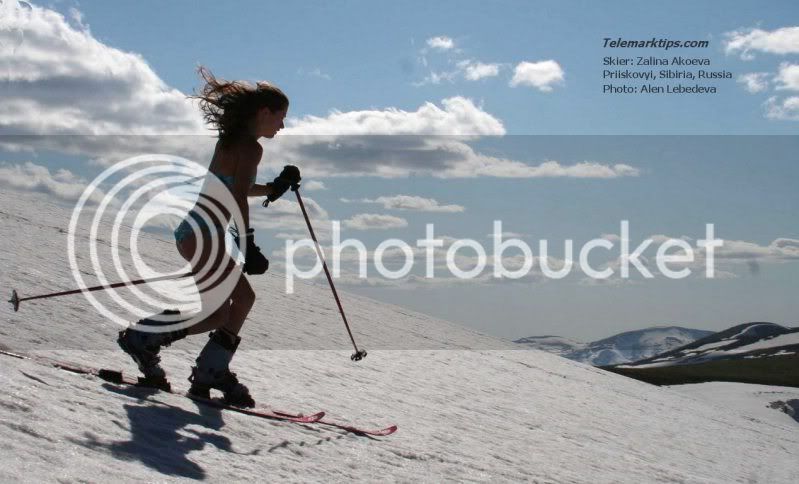 My names Devon. I've been skiing for nine years off and on, at lost valley because I'm cheap and its close. I currently don't own ski's because basketball coaches prohibit outside sports during the season. So I quit basketball.

soooo if anyone has boots or ski's they wanna sell me... lol

My name is Dave, been free-heelin since the mid-1970s. Used to get tix yanked regularly at Stowe, Mad R etc for "illegal skiing on XC gear."

STill get tix yanked for OOB silliness. Some patrollers, they got no sense of humor.

Mostly ski true backcountry (Camden Hills, northern White Mts), no lifts no tix no worries. Ok, maybe we worry about getting back to the car after dark....

Favorite backcountry trip: goin up to Zealand Falls Hut in Pemi wildOrness. Wicked nice glades up there in an old burned-over area.

My tele gear, (like its owner) is aged but solid: 1st gen Scarpa T2, Voile, Black Diamond and Rottefella binders, Karhu Tele Supreme 203s (one of the first single-camber tele boards, they still work damn good) Karhu ATS metal edge tourers @ 200 cm, Fischer GTS 200s and Karhu Outbound 190s...plus a schweet pair of old Dynastar 203s for slicing up the piste. Recently started wearing a brain bucket after I stuffed it bad and my noggin ended up 1" from a Very Large Spruce.

My names Garrett, and I've been skiing since I was 4, teleing for a few years now. I moved out to Utah last year and skied at Alta and Snowbird. I also worked for backcountry.com, which gave me access to any ski resort in Utah. We took a trip out to Lake Tahoe for the best skiing I've ever had. 7 ft of snow! Now Im back in Maine and Im going to get a pass at Sunday River and Sugarloaf. I also ski patrol, so you might see me doing that at Lost Valley or Shawnee Peak. I dont pull passes, so don't worry.

I sold a lot of my good tele gear last year and now Im left with, G3 bindings, t1 boots, and Fischer Prohete 106 underfoot skis. I might pick up some BD Justices soon, they were my favorite out in Utah.

my names ray, and I snowboard.

2point5RS_Dan said:
My name is Dan and I eat shit on the bunny slopes
Click to expand...

My name is Rob and i pretend to snowboard...falling just gives me a good excuse to have a few beers in the pub to take the sting off.

2point5RS_Dan said:
My name is Dan and I eat shit on the bunny slopes
Click to expand...

sums it up nice

I snowboarded at Lost Valley a few years ago, then skied on rentals at Sunday River for winter two years ago. I ended up having zero time last year to ski, but this year I hope to get up there some more.

Any tips? I'll probably get stuff at a ski swap this year.

My names TJ and i Ski race and also ski freestyle.

I ski for the university of Maine currently,

devon if you're serious about skis i have a couple pairs im no longer using that im willing to sell.

i have lots of boots 4sale too!

Ski pow, are you up at UMO?

yeah bro. you might have seen my rex- its a red bugeye with a black trunk.

Ah, nick's old bugeye! I have seen you around, look for my wagon in my signature, its usually around Penobscot.

My name is Patrick and I have been boarding for 7 years now. Mostly Sunday River but sometimes Lost Valley if i just wanna mess around. Havnt been able to do it in a while since I joined the military and am stationed in the south but I go multiple times when I come to maine in the winter, I will be tearing it up this December/January!!!

Use to snowboard when I was a teenager. Busted my @$$ hard when I was 20 on a double jump in 2002 that I was obviously un-prepared for. It took me out for while, nothing really serious but I did need minor surgery on my tailbone area a few years later that was likely related. I haven't been back since, but I would like to. I just haven't been able to come up with the cash to buy some equipment between all my other hobbies. I use to snowboard at Ticomb Hill &amp; Sugarloaf, and have also rode sunday river a few times.

Hello everybody. My name is John. I try to telemark sometimes.

I picked up a set of NTN bindings and Crispi Evo boots late last season. I skied on them a few times before the season totally ended. Mounted on Rossi Bandit B2 176cm.

4WRXter said:
Hello everybody. My name is John. I try to telemark sometimes.

I picked up a set of NTN bindings and Crispi Evo boots late last season. I skied on them a few times before the season totally ended. Mounted on Rossi Bandit B2 176cm.
Click to expand...

I cant wait 2 get some turns in at the back soon. Johny, I think we need to have a telemark group day at the back! cuz nels chase and i all tele in my age range and Dave P should be up there also along with any of the other saddlebackers